Whether its on the joyoftournaments.com website or on tabroom.com, every tournament has a schedule. There are a couple of notable things on each schedule. Let’s look at this schedule for example. 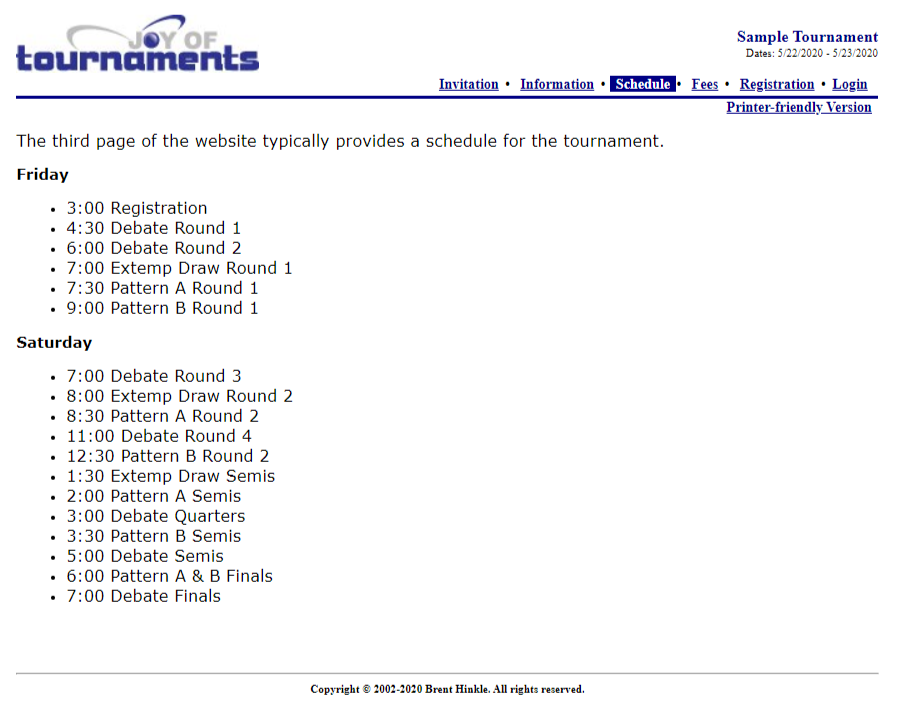 First, the non-debate events are usually split into multiple groups called Patterns. For every event in each pattern, they will have rounds occur at the same time as each of the other events. So if you had an event in Pattern A and an Debate event, you’d be busy on Friday at 4:30. 6:00 and 7:30.

Second, for every event, you will have multiple rounds. For every event, based on the tournament, will have a set number preliminary rounds (or prelims), followed by outrounds, in which the best teams/speakers from the preliminary rounds compete. The number of outrounds varies based on the size of the tournament. Some of the biggest tournaments have even seen teams competing in Triple Octofinals (Top 32)! Thus, if you were a really good debater, you’d be focused on the times of Round 1 and 2 on Friday on the sample tournament above, as well as Round 3, Round 4, and the outrounds on Saturday. Look at the page of any specific tournament to see how their tournament is structured.
​
Third, when a student competes in multiple events in the same Pattern, they are considered cross-entered. Every tournament has rules against cross-entry as they usually slow down the tournament. Some even ban competing in two different events from two different Patterns. You should always try to compete in as much as possible, but be cognizant of specific rules against cross-entry.

There’s a lot of paperwork you should have ready. This is a shortlist of what is always necessary but be sure to check with your school to see if there’s any specific policies within your school.

Attending tournaments will cost you money, especially because these tournaments are often fundraisers for other debate teams. Here’s what to expect.
Entry fee: Tournaments will charge you per entry into their tournament. They will provide fee information for how much each entry for each event will cost.

Uncovered Judge fee: If you can’t find a judge, the tournament will hire one for you. This will cost you money
​
School Entry fee: This is the general fee for entering the tournament

Late Drop fee: If you enter a student, who then cannot go to the tournament, you can drop(remove) his entry before a certain deadline listed on the tournament’s website, but if done after that deadline, you will have to pay a fee. To avoid this, do not sign up people without their permission and if something urgent suddenly comes up, have a replacement who can fill in their spot.

Fees are an important part of tournament registration. Make sure you plan your tournaments in a way that won’t strain your club’s finances and do your best to limit fees.